Dan Thorpe and Katy Sunter Thorpe traveled to The Colmore Cup Trial in the Midlands which was Round 3 of the 2020 ACU S3 Parts Championship.

JSM GG Rider Dan Thorpe had a fantastic P1 in the S3 Class to extend his championship lead. Dan was actually second overall only just missing out on the overall win by two marks. Great weekend for Dan.
JSM GG Girl Katy Sunter Thorpe was P4 in the Clubman Class which is her best S3 result so far this year.
GAS GAS Rider Sam Atherton is also worthy of a mention finishing P5 Clubman and is now only one point off the Championship lead.
JSM GG Girl Louise Alford was P16 Clubman.

JSM GG Youth riders Jack Dance and Harry Turner both rode at the YMSA Beta Trial at Burycliffe on Sunday after their successful TrialGB on Saturday.
Jack was P1 Youth and the overall winner. Harry was P2 Youth 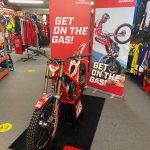